Last week just about every asset class sold off – Bonds, Growth Stocks, Value Stocks (with some exceptions), Crude Oil and, not to be left out Bitcoin (or in general cybercurrencies). Some asset classes got hit harder than others. It really does not matter; we had a bad week. It happens, get over it.

Now, you might have heard many reasons for the across-the-board decline in asset values. Some peoples’ reasons were other people’s excuses.  The difference between a reason, which implies cause and effect or an excuse which is a mechanism to deflect blame can be often mistaken.

If you were on the wrong side of the market last week, and felt a noose tighten around your neck, proverbially that is to say, then you likely had excuses. If on the other hand, you know how to take the good with the bad, weather a storm, then last week was just a lesson in humility. As such, you looked for reasons for the declines and took whatever action if necessary, to get on with life. That was typically, selling some losers, adding to sold-off winners and maybe adding a few names to take advantage of an improving non-COVID economy.

We can pin last week’s declines on a few reasons. First, stocks, and growth stocks in general have had a fantastic run, the likes of which we have not experienced in close to a decade. As we say in the business, “trees don’t grow to the clouds.” A little profit taking was in the cards, we need to accept it and get on with life. Second, bond rates, as primarily defined by the 10-year US Treasury poked above 1.50%. For some reason, that was a metric which got investors all lathered up. As I will explain later, it was a false flag. A third reason was the incessant focus on whether the geniuses in Washington DC would pass another round of fiscal stimulus. Withdrawal from further monetary stimulus was putting market watchers into a frenzy if fiscal stimulus did not pass in Washington DC. Lsst week, it all seemed to hinge on the notion of a $15-hour federal minimum wage, which is anti-stimulatory. However, the minimum wage proposal died over the weekend.  Lastly, the sell-off in cybercurrencies which we now found out is being held in some amounts by major tech companies created its own spasmodic reaction.

Here is a dirty little secret that no one in the financial media was talking about. Hedge fund liquidations. Many hedge funds, especially the small to mid-sized ones have quarterly withdrawal windows, Those withdrawals in many cases require a 30-day notice period. My assumption is that hedge fund liquidations were at work last week, to make good on March 31 liquidations. Understand a few things about hedge funds. Hedge funds are not hedged as they were in the industry’s infancy thirty or so years ago. They are now highly leveraged private partnerships who make large one-way bets. The reason is that the hedge fund managers get paid what are called performance fees.  This is a form of moral hazard whereby the hedge fund managers benefit if the fund makes money, but the investors take the pain if the fund loses. Hedge funds have underperformed for years now and in many instanced produced negative returns. I talked about what went wrong with Melvin Capital last month with respect to the Robinhood squeezes. We learned over the weekend that a hedge fund associated with Fidelity Investments, named Geode Capital Management shut down. Imagine how many other unknown hedge funds were shutting down or liquidating last week.

Now let us talk about the 1.50% line-in-the-sand for the 10-year US Treasury. This was one big excuse for stocks having sold off. Want to know why? It is mostly psychological not financial. We have had plenty of other such lines in the sand in the past few years. Below is a chart which I put together using the Telemet software which is utilize here at LakeView Asset Management. 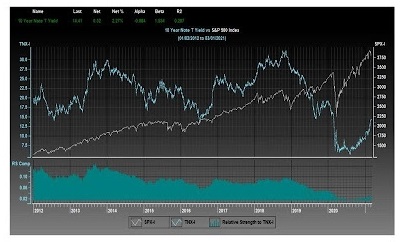 Why won’t rates go higher? For one thing, the global impact of the pandemic will be felt for many more years. Second, we are nearing the practical end of governments being able to pump out massive amounts of fiscal stimulus. The more fiscal stimulus that gets unleashed, the more pressure on central banks to keep rates low will exist. Expect FOMC Chairman Powell to continue to jawbone rates lower and his mantra that the Fed will not be curbing asset purchases. Third, while inflation may be picking up, it will remain below the Fed’s 2% target for the foreseeable future, keeping Fed funds targets where they are now for the next or more.

So, should we fear rising rates? I think not but let us be wary of higher rates. Also, the fear last week that rising rates would hurt technology companies. That might have been the case in the past. However, now those tech companies that have led the markets higher have strong balance sheets and are flush with cash, so rates will work in their favor, not against them.

Disclosure: At the time of this commentary Scott Rothbort, his family and/or clients of LakeView AssetManagement, LLC was long SPXL, SPY, QQQ & TQQQ –  although positions can change at any time.
Scott Rothbort is the President & Founder of LakeView Asset Management, LLC, an investment advisor representative specializing in high net worth private wealth management. For more information on investing with LakeView Asset Management, LLC call us at 888-9LAKEVIEW or request more information by clicking on the contact button on the top right-hand corner of the website. LakeView Management, LLC is a Nevada LLC, with its principal office located in Henderson, NV and branch office located in Millburn, NJ